Gender equality policies and gender distribution in MSCA and ERC

Since their creation, the MSCA have placed a strong emphasis on promoting gender and equal opportunities for their fellows, and within their projects. Indeed, the MSCA require transparent recruitment and high quality employment and working conditions for researchers, in line with the principles of the European Charter for Researchers and the Code of Conduct for the Recruitment of Researchers. In addition, MSCA grants permit part-time working and parental leave. Post-doctoral researchers who wish to resume their career after a break, for example to raise children, can apply to a dedicated panel of the MSCA Individual Fellowships.

Figure 5. Distribution of men and women accross all Actions within MSCA, 2014-2018

Over the five years of the running Horizon 2020 calls (2014-2018), MSCA supported a total of approximately 25,000 researchers, out of which 40 % were women. A breakdown of the ration of men and women per Action is displayed in Figure 5. Although no significant difference can be found in the gender distribution of the COFUND, ITN and IF Actions (respectively with a gender gap of 8.7, 7.5 and 7.2 percentage points), it is shown that the RISE Action displays a larger gender gap with 13.2 percentage points. This can be attributed to the fact that RISE projects involve senior as well as early stage and experienced researchers, whereas other actions only involve early stage- and experienced researchers (depfined as pre- and post-doctoral researchers). All of these values are notably higher than the gender gap in EU-28 as shown in Figure 1, since we would only expect between 2014 and 2018 a 3 point gap at the doctoral stage (ITN), 4.5 points at post-doctoral stage (COFUND and IF), and an aggregate of 9.5 points for a mix of senior, mid-career, post-doctoral and doctoral stages (RISE). The gender gap across all MSCA Actions therefore appear to be roughly four to five points above that expected from statistics at the EU level, perhaps pointing to further efforts to be made.

The only programme allowing individual rsearchers to directly apply for funding (i.e. not via their institution) is MSCA-IF. For this programme we can extract success rates of men and women and analyse their differences, as shown in Figure 6. Although the total number of female applicants over the 2014-2018 period is much lower than the number of male applicants (roughly 17,550 versus 25,750), we can see that their average success rate is higher, resulting in female researchers being better represented after evaluation stage than at proposal submission stage (2,770 versus 3,620).

Figure 6 shows that on average, women are 1.7 percentage points more successful than men at securing MSCA-IF funding. There are strong discrepancies between panels. The career restart panel features the most female-favouring score, with a 4.5 percentage points advantage to women over men, followed by Social Sciences and Physics with 3.2 points; while results in the Economics panel seem skewered towards men, with 3.5 points disadvantage.

The ERC has seven Working Groups dedicated to the advancement of specific topics, such as open accessor international participation. One of them is focused on gender balance. Since women and men are equally able to perform excellent frontier research, each process within the ERC - from creating awareness about the ERC to signing of grant agreements – is designed to give equal opportunities to men and women. The purpose of the gender balance working group, launched in 2008, is to monitor these aspects at all stages. 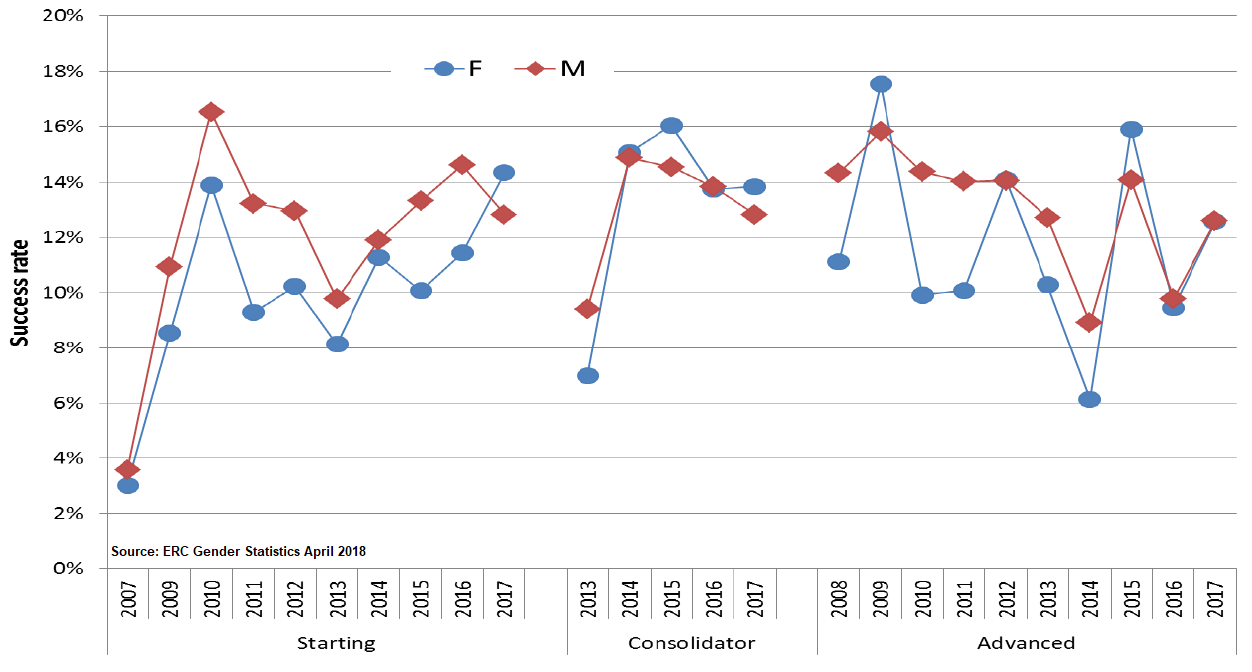 To achieve these objectives, the working group has been monitoring the evolution of gender balance of ERC funded projects since its inception, the latest available statistics dating from April 2018.

However, this tendency does not equally apply to all domains of science. Figure 8 shows the differential success rate by panel and call for the Horizon 2020 calls. The Life Sciences panel consistently features lower success rates for women, with a particularly strong imbalance for the StG call (early career researchers) at -4.5 percentage points. On the other hand, the Physical Sciences and Engineering panel shows success rates slightly in favour of women at all career stages; while the Social Sciences and Humanities panel features more balanced statistics.

When it comes to the total number applicants (i.e. irrespective of their success or failure in securing the grant), a positive tendency is also observed as shown in Figure 9. The total share of female applicants steadily grows since 2014, reaching 30 % in 2017 and as high as 37 % for StG only in the same year. The lowest shares of women participation are reached in the AdG (senior level), in agreement with the ‘leaky pipeline’ effect and the statistics at EU level displayed in Figure 1 and 2 (24 % of women at senior level overall, only 15 % in STEM fields in 2016).