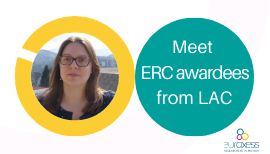 You have recently been awarded an ERC Starting Grant. Could you tell us about the research you are conducting with this grant? How can the general public benefit from it?

I am anthropologist and a historian. I work on the circulation of Indigenous knowledge and material culture from Brazil to Europe, with emphasis on the early modern period. My project, BRASILIAE. Indigenous Knowledge in the Making of Science:Historia Naturalis Brasiliae, is an attempt to understand the role of Indigenous knowledge – as well as its transformations – in the creation of what we now think is modern, European science. The project takes as its central focus the book Historia Naturalis Brasiliae (HNB), published in 1648 by Willem Piso and George Marcgraf, during the period of the Dutch colonisation of Northeastern Brazil (1624-1654). The HNB is an encyclopedia that brings together information about the natural world, linguistics, and geography of Brazil as understood and experienced by Indigenous peoples as well as enslaved Africans, next to the viewpoints of both Dutch and Luso-Brazilian settlers. Together with my research team, we are asking how Indigenous knowledge was collected, (mis)understood, and transformed into European science by focusing on ethnobotanics, ethnozoology, and indigenous material culture.

Too often we think of Indigenous knowledge as simply "pieces of information": as if European colonisers had come to Brazil and simply collected new natural species that, in turn, would have benefitted the development of European science and society with new natural products to explore. What we want to show is that colonial history is much more complex than that: Indigenous ways of knowledge are forms of classification and scientific thought in their own right. Likewise, Indigenous peoples incorporated African and European animals and plants as part of their own lives and cosmologies. We want to show how much of those Indigenous forms of knowing, thinking, and engaging with the natural world actually became an integral part of what we now call western science -- one simple example is the use of Tupi names in Linnean taxonomy, but there is so much more! By doing that, we hope to contribute to a more inclusive understanding of how science is constructed in an intercultural setting.

An important innovative aspect of the project is that it studies a traditional historical primary source – the book HNB – through both a historical viewpoint and also a contemporary Indigenous perspective. In order to do so, we bring together an interdisciplinary, international team of experts that includes anthropologists, historians, botanists, zoologists, linguists, and Indigenous experts. In order to do that, we collaborate with the Naturalis Biodiversity Centre in Leiden and the Museu Paraense Emílio Goeldi in Brazil.

Perhaps the most important benefit of the project, both academically and socially, is that we get to reflect about what constitutes knowledge: what are the political, historical, and social processes that shaped the way we got to know what we know? Whose voices are heard, and how? I see the project as part of a larger, international, and continuous effort to renew the fields of History and Anthropology. In Brazil and elsewhere, the field of Indigenous History has been growing immensely, and our project is part of that.

How did you find out about the ERC selection process? Can you share any tips with our readers on how to apply for an ERC grant successfully?

As soon as I joined the Faculty of Archaeology in Leiden in 2011, I learned about some of the Dutch and European research funding programmes. Leiden University, and Archaeology in particular, is very successful in obtaining such grants. This means that I was very lucky to work together with senior and junior colleagues who had their own NWO (Dutch) and ERC projects. From 2013-2017, I was a post-doctoral researcher in the ERC-Synergy project NEXUS1492: New World Encounters in a Globalizing World, directed by Prof. Dr. Corinne Hofman. In such an environment, you learn very quickly what it takes to be awarded an ERC grant.

Between learning what it takes and actually getting a grant yourself, however, there is a lot of work to be done. My suggestions are: be bold and be yourself. Focus on your vision for your field and on what you can do (if you get the grant, you will have to deliver!). Another important point is to let your colleagues read your proposal, talk to people from different fields about your research, get as much feedback as you can and learn from it. Be prepared to embark in all sorts of conversations about the scholarly and public implications of your work. In my experience, the ERC selection process is tough, but it is also excellence-driven and you will be taken seriously as a researcher, irrespective of your age, gender, nationality, or the area of your scholarly work.

Young researchers from everywhere in the world can be recruited to work in ERC teams as PhD candidates, post-docs or researchers. How would you encourage Brazilian researchers to look for these opportunities as team members?

Working as a team member in an ERC project is a great opportunity to learn new research skills, to renew one’s vision of their field of studies and its potentials, but also to gain experience in working within multi-national, multi-cultural research settings. That was my case when I worked for NEXUS1492 before obtaining my own grant, and also witnessing the work of other ERC-funded research groups in Leiden and in the Netherlands more broadly. I observed that successful research groups are international and open to debate. In my own BRASILIAE project team, we have a Brazilian post-doctoral researcher, PhD candidates from Spain and Belgium, as well as research partners and collaborators from the Netherlands and from Brazil.

I strongly encourage Brazilian researchers to apply for these positions. If you go back to Brazil after the end of the project, you will be able to bring that experience to our country and contribute to developing Brazilian science by training students, doing great research, publishing about it, making it accessible etc. If you stay abroad, as is so far my case, you have those same opportunities, but you also become some sort of spokesperson for Brazilian science abroad, which is a great honour and great responsibility.

CONFAP and ERC signed an implementing agreement in 2016 to encourage young Brazilian scientists to join ERC-grantees’ research teams in Europe for a short-term period. How can this opportunity benefit these Brazilian researchers’ careers and Brazilian science at large?

Both the Brazilian and the international research communities can benefit enormously from this type of agreement. I’d like to stress that in Brazil we have world-class researchers and great universities that meet all the requirements to join the conversations taking place at the international level. What is more, in the fields of Archaeology, Anthropology, and History, the Brazilian academic community has been producing top-level, innovative research for many decades already, and the international community has a growing interest in what we do. Such agreements are a gateway to facilitate that.

How has mobility influenced the direction of your career?

In your opinion, what could be done to further enhance the mobility of international researchers between Europe and Brazil?

International mobility has been essential to the development of my career. I received my BA, MA, and PhD degrees from one and the same Brazilian institution – the University of Campinas – but all throughout those training years I had a number of short-term fellowships and research visits to universities and research centres in the Netherlands, Denmark, Germany, and the US. Of course, such international mobility does not come easily or free of costs. Therefore, I strongly believe it is essential that national and international funding agencies, such as CONFAP and the ERC, continue to offer Brazilian researchers these opportunities to study and work abroad.

That is, evidently, the big picture. But as with all big pictures, it is made of small coherent actions that lead to the results one wants. So, for instance, learning languages is an important aspect of international mobility: all Brazilian students need to have more and better access to foreign language courses during their training, hopefully starting already early in school. This calls for public investment in education. Likewise, knowledge of Brazilian culture and the Portuguese language should also be promoted abroad, so that more people will be interested in coming to Brazil. Internationalisation is a two-way street.

The ERC (https://erc.europa.eu/) is led by an independent governing body, the Scientific Council. The ERC has a budget of over €13 billion and is part of the EU research and innovation programme, Horizon 2020.

European Research Council (ERC) Starting Grants are designed to support excellent Principal Investigators at the career stage at which they are starting their own independent research team or programme in all scientific fields.

The call is annual and open to researchers of any nationality with 2-7 years of experience since completion of PhD.

Check the other opportunities open to Latin American and Caribbean researchers in the guides on ERC we prepared for you (links below).